It’s 5.30am, I was out checking cows who are due to calf when I came across a cow balling in the next field along, where the cows with baby calves at foot resident. The mother was making a right fuss and I soon realised why; her two-week old baby had slipped through the gorse bush and some 2m down into a brook. After a 15 min battle to convince the calf to help me, help him back up the vertical drop, whilst his deeply concerned mother watched on, pacing and creating, I felt very… awake! So… here we are, I thought I might as well put an early start to good use whilst my little girls are still fast asleep and catch up with a ‘spring recap’… in blog form. 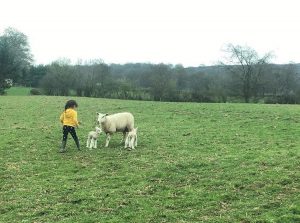 I’ll begin with the obvious April chat; lambing time! We lamb our ewes outdoors on the fields that surround the house and farm and we check them every 2-3 hours, popping around them on atv/utv. Most ewes tend to crack on and lamb themselves and their lambs get up and suck and don’t look back, however it is our job to assist those who need it. For example, some lambs are born breach (bum first), backwards, heads back, legs back or sometimes just too big and need a pull. I would say that most ewes that I had to catch to assist with giving birth were because they were only presenting  a head (legs back). For anyone who doesn’t know, a baby lamb should be correctly presented with two little front feet and his nose all pointing out together. In order to get the lambs out alive and to prevent harming the ewe, we have to catch the ewe, gently but firmly push the head back inside, just far enough so that we can then hook a finger around the lamb’s leg joints and pull them forward one at a time to meet the lambs chin/nose. Once the two front feet and the head are all pointing the right way, it is safe to pull the lamb out of the ewe. That is a brief summary anyway and perhaps makes it sound more simple than it is. This procedure can take several minutes but can also take an hour, which can then often result in losing he lamb. 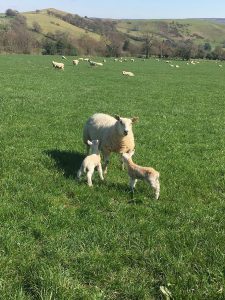 also snow. On the nights that we had snow, I would panic and drive around the sheep more frequently, worried sick that we would lose lambs to the weather conditions. The one night, with a thick covering of snow, we had 15 lambs born in an hour, between 1am and 2am. Although I feared we would be losing them, they proved me very wrong and every one got up and sucked colostrum sharper than most of the time! They weren’t phased! Neither were the Curlew, the same pairs would still be in the same places at the same time of day. The Curlew become rather predictable as they pop around in their pairs during lambing time, and they probably feel the same about us. In the first instance, they seem a little jumpy and wary of us and the vehicles, but within just a few days they are used to the noises and movements and bob around minding their own business.

If you have read my posts before, you will know how strongly I associate the Curlew with lambing time. It is the main noise you hear; The Curlews’ Call is above all the loudest and most frequent sound and once they start calling, they drown out the bleats from baby lambs. 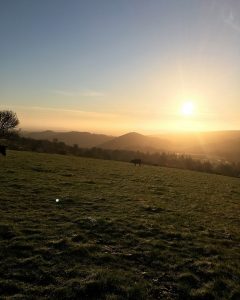 As we witness the Curlew settling down throughout our lambing season, we notice that once again they are taking to all the usual spots, most of which we wish they wouldn’t. We just know that they are going to be predated. I’m a fairly optimistic person, so I don’t like to appear pessimistic, but when we have seen more badgers in the area over the past few months than we have in the past five years, and I have watched the same two foxes on my night checks every single night, taking paths through the fields that the Curlew are aiming to settle in, it’s just obvious that without protection and control the ground nesting birds don’t stand for much hope. The foxes didn’t take a lamb and only scavenged the afterbirth that the ewes left behind, but would they really be so forgiving if they saw some vulnerable birds, eggs or tiny chicks if they were spotted in the grass? We had been watching a goose sitting on a tufty field that we hadn’t grazed through winter. Admittedly, it was a silly place for a goose to lay and I struggle to believe that she would have got the goslings to the pool safely anyway, however, she didn’t have a chance as the whole nest was predated. It was so sad to see and the pair of geese looked lost as they waddled around the patch, honking to each other. Also this week, the duck of our yard pool arrived with 11 ducklings, two days later she only had four. There is a theme and sadly it’s not a spell of success in such a highly predated area. If predators amongst this ecosystem aren’t afraid of a huge, loud goose then it doesn’t give me much faith for a Curlew. Again, I’m sorry to sound like a pessimist but I’m just trying to express how vulnerable these precious, ground nesting birds really are and how much safety and human intervention they often require to succeed.

Now we have welcomed May, we have been calving thick and fast and the ewes have basically all lambed, I only travel the lambing fields once a day, just to check that the ewes and lambs are of good health and where they are supposed to be. This means that the Curlew have less disruption from me! I do laugh to myself as one of the pairs here are always seen with a pair of duck too… I think they have made friends and are trying to gather survival tactics from one another.

Lets’ all hope for some warmer weather now… it’s about time that we were able to do our work without wearing a coat as we see mid-May!

The girls are now awake and demanding breakfast so maybe I will get back to this in a few weeks to give a summary on May too, where I promise to sound more like my optimistic self! Rhi x