This iconic species is Britain’s largest wader and was once common throughout the UK, which hosts around 25% of the international population.  It is now considered to be the highest bird conservation priority.   In the UK alone curlew population numbers have declined by about 50%, but rapid declines across Europe have led the International Union for the Conservation of Nature to classify the Eurasian Curlew as ‘vulnerable’ on the European Red List, meaning that the species is at risk of extinction.  Eurasian curlew were once widespread, breeding on farmland and adjacent wet areas as well as moorland.  Locally, the curlew population has declined by over 30% in 11 years.

The Shropshire & Welsh Marches Recovery Project study area is central in the investigation into what can be done to reverse the decline in the UK and wider European Curlew populations. The area is located on the Powys Shropshire border and is home to both lowland and upland species.  This ecological hinterland between upland and lowland, north and south, is the breeding ground for a small population of about 40 pairs of breeding Curlew.  This regional stronghold is one of only a handful of known population groups of this size, outside managed moors and reserves in the north. 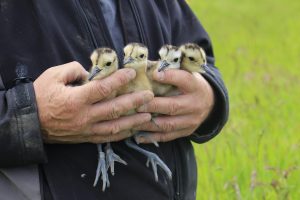 The project works thanks to its close collaboration with farmers and land managers who describe the first evocative bubbling of returning curlew to be a herald of spring.  Farmers describe memories of hay meadows from which ‘curlew and peewits1 rose in clouds’.

The Curlew Country project has been trying to establish why these long lived birds (they can exceptionally live for 20 or 30 years) are now failing to breed successfully on the farmland habitat they nest in outside moorland and upland areas.  A  Nest Monitoring Project in the local study area has deployed cameras, used thermal data loggers and close observation techniques.  During the years 2015 and 2016 no chicks were successfully reared from the nests monitored.  Based on our findings we are now acting fast to intervene to try and save the population of about 40 breeding pairs within the local trial area, and gaining valuable information to help other similar curlew projects.

‘I fret ..about the curlew, as though it is their migratory wingbeats that turn the earth, and should they fail to appear we will have entered some ecological end time.  But they are home, home to breed’