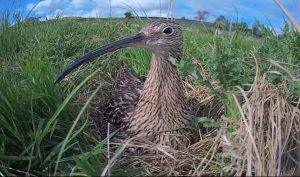 This year, our planned work has had to change rapidly to meet circumstances, including insufficient funding for a full project and now COVID-19.   It was almost a relief to get Curlew Cam up and running to keep the plight of Curlews in people’s minds and some sense of the normal routines for the small Curlew Country team.  Ornithologists Tony and Tim were helped remotely by Peter Dobson, from Carnyx Wild, and on-site (with social distancing) by Chris New, from Secure Web Services when setting up the Curlew Cam and we are grateful to them both. They did a great job and the fish-eye lens makes our Curlew pair look as though they are nesting in rural idyll.  There was though still a little thistle management to do, as the male has been reminding us when he tries to re-arrange the thistles further away from the nest.*  A reminder perhaps that all outside the nest may not be as charming as it seems in the Curlew Cam frame.

This pair are nesting on a field where Ornithologist Tony Cross and I first found the birds in this territory 5 years ago.  That year, the first nesting attempt failed early due to predation and the pair had a second attempt at nesting in another nearby field.  Despite persistent efforts, I had been unable, through any means, to contact the farmer who owned the field to ask him if we could go in to try and locate the Curlew nest and monitor it.  When I eventually tracked him down, it was just too late. He willingly gave his consent and was keen to help the Curlews, but unbeknown to him the contractor had already been in and cut the field, inadvertently destroying the nest.

Curlew Country’s research and experience has demonstrated that if we are to save lowland waders nesting on farmland from being lost altogether, farmers will need realistic agri-environment

support and effective predation control.  Providing these essential components of wader recovery can be problematic.  The high and relentless demand that we have for cheap food and an antipathy toward predation control by a vociferous group, often leaves much conservation delivery in limbo.

Some conservationists advocate that the only places where biodiversity can be effective is on un-managed, or wild areas that can replicate fragments of an eco-system scantily occupied by humans.  Others favour reserves specifically managed for a range of species and habitats. An alarming number of people still think that if wildlife is left to its own devices it will recover, which is surprising, given all the evidence to the contrary of dramatic species decline and loss in the UK.  Left to its own resources a few more adaptable species thrive, whilst many others fail.   Realistically, whilst humans are placing their demands on the landscape and its natural resources, there will always need to be some form of management even in spaces that are left to re-wild as those places will have boundaries too.  Then there are the wildlife and habitats which thrived because of the cropping management associated with less intensive pre-war food production, now almost entirely replaced with more intensive methodology.  Curlew is one of them, along with species rich hay meadows and pollinators. Areas of land managed carefully and not confined to intensive food production can of course be beneficial not just to waders, but many other species and habitats, as well as improving soil and water quality, and sequestrating carbon. 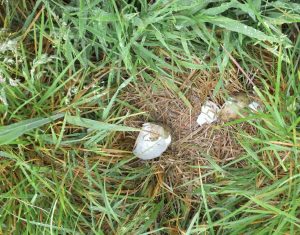 In Wales modelling suggests that without drastic intervention, Curlews including our Curlew Cam pair, could be lost within 2 decades. Across the UK, polarised views, long debated, have stifled the urgent action needed to save threatened wildlife.  A rich tapestry of habitat and species will require an extended mixture of land management by farmers, predation controllers and conservationists.  Food production, carbon sequestration, soil and water quality management, tree planting and re-wilding can all be woven in by visionaries and pragmatists alike.  Let’s please adopt realism, compromise on idealistic views and get on with weaving the tapestry instead of debating how it is to be woven whilst the colours are destroyed by the sun.

To hear the evocative bubbling call of the Curlew click below:

Would you be willing to lose it from your landscapes in your lifetime?

To help save our Curlews from becoming extinct click here

To learn more about the work of the Curlew Country Project click here, or return to Curlew Cam click here.

Both the following interview and blog were released just after my blog had been drafted.  They are co-incidentally relevant to some of our blog themes and are recommended:

Interview by Curlew Ambassador, Mary Colwell with Professor Ian Newton on Curlews – ESSENTIAL LISTENING on the history and plight of lowland Curlew:  https://soundcloud.com/curlewmedia/ian-newton-curlews-in-the-20th-century

*The Curlew Cam pair have chosen a field which has not been intensively managed for food production for a couple of years.  It is likely to have been attractive to these birds because of the 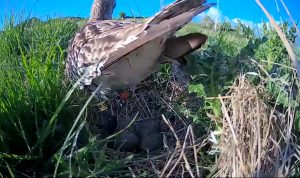 height of the vegetation.  You can see that they are able to hunker down so that they cannot be seen from a distance across the field, but able to look out over the top of their nest surrounds if they need to.  You can also see that the vegetation does not include species beneficially associated with modern food production.  Ryegrass that is grown as a modern crop for harvesting as silage or hay often offers the most attractive height of vegetation for Curlews seeking a nest site.  Its vigour, in comparison to slower growing native species, means that it provides just the ideal sward height when Curlews are trying to nest.  Over 50% of the birds studied in the Curlew Country area have nested in grass to be cropped for silage or hay.  The ‘light’ management of the Curlew Cam field has meant that the vegetation has not been grazed or cut since last autumn, and the sward has proved more attractive than neighbouring fields of predominantly ryegrass crops.  It will also be drier than the wet ground where adults are frequently seen probing their long bills to feed on invertebrates.

Curlews spread off their moorland breeding strongholds in the mid-twentieth century, when there was plentiful extensive wet pasture to feed on and species and invertebrate rich hay meadows to hide nests..  Our senior farmers talk of ‘clouds of curlew and lapwing rising from the hay meadows’ in their youth.  The Curlew Cam nest field is also likely to host a greater abundance of surface invertebrates than a silage or hay mono-culture crop. Chicks are precocial – they feed themselves and are not fed by adults.  They rely on insects found in species rich grassland, typically associated with hay meadows and wet grassland. Adults too will surface feed on invertebrates, especially whilst rearing chicks.  Species rich grassland has diminished dramatically since the Curlew first arrived in the lowlands from the moorlands, replaced by drier fields and more productive grass and arable crops.  Wet ground has been drained and routine predation control, carried out on most farms and estates in times when many more people were employed, has ceased altogether.  Curlews have become more vulnerable to agricultural disturbance as they choose nesting sites away from hedges, trees and woodland to put distance between themselves and the places where predators can lurk concealed. 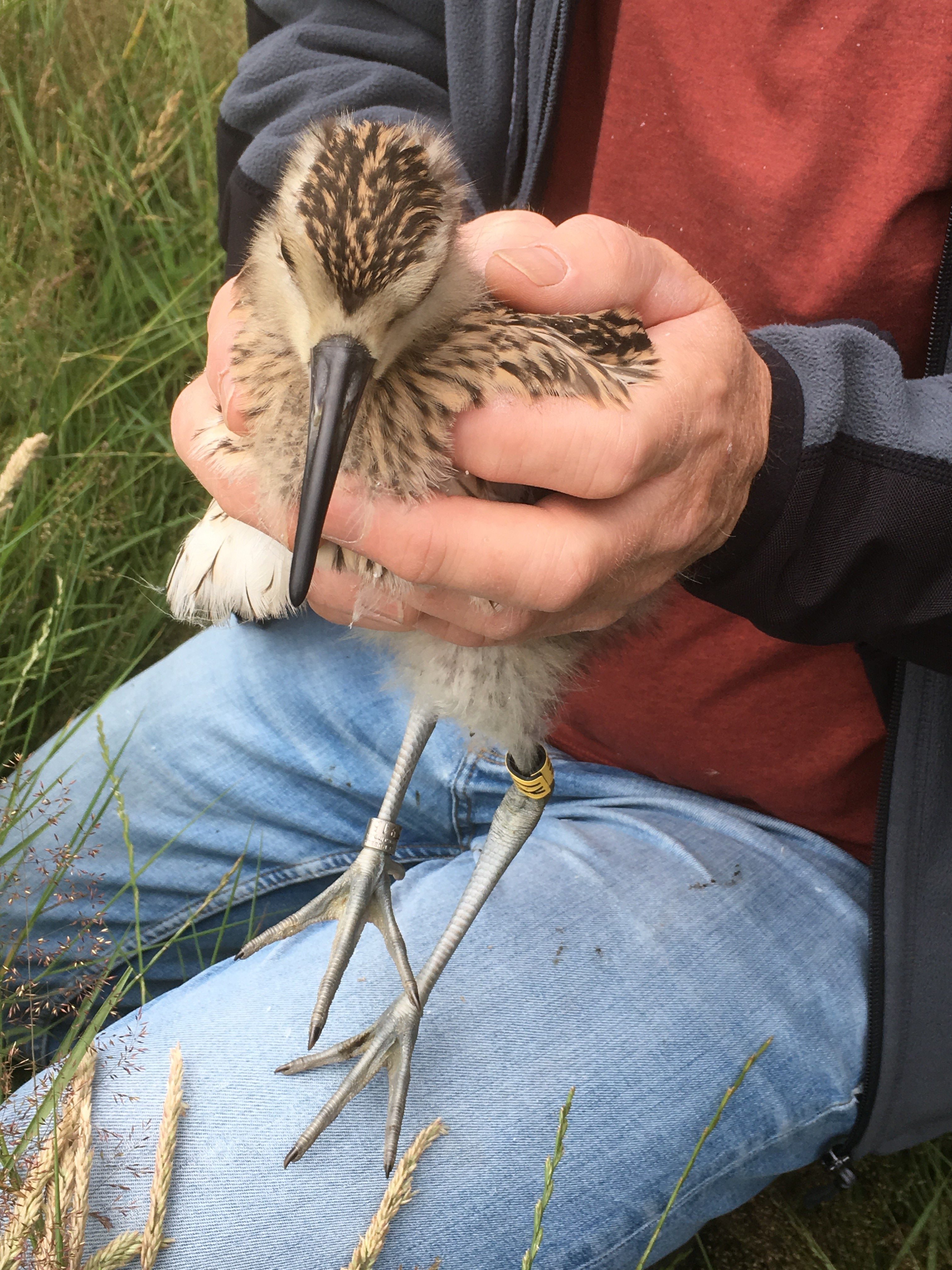 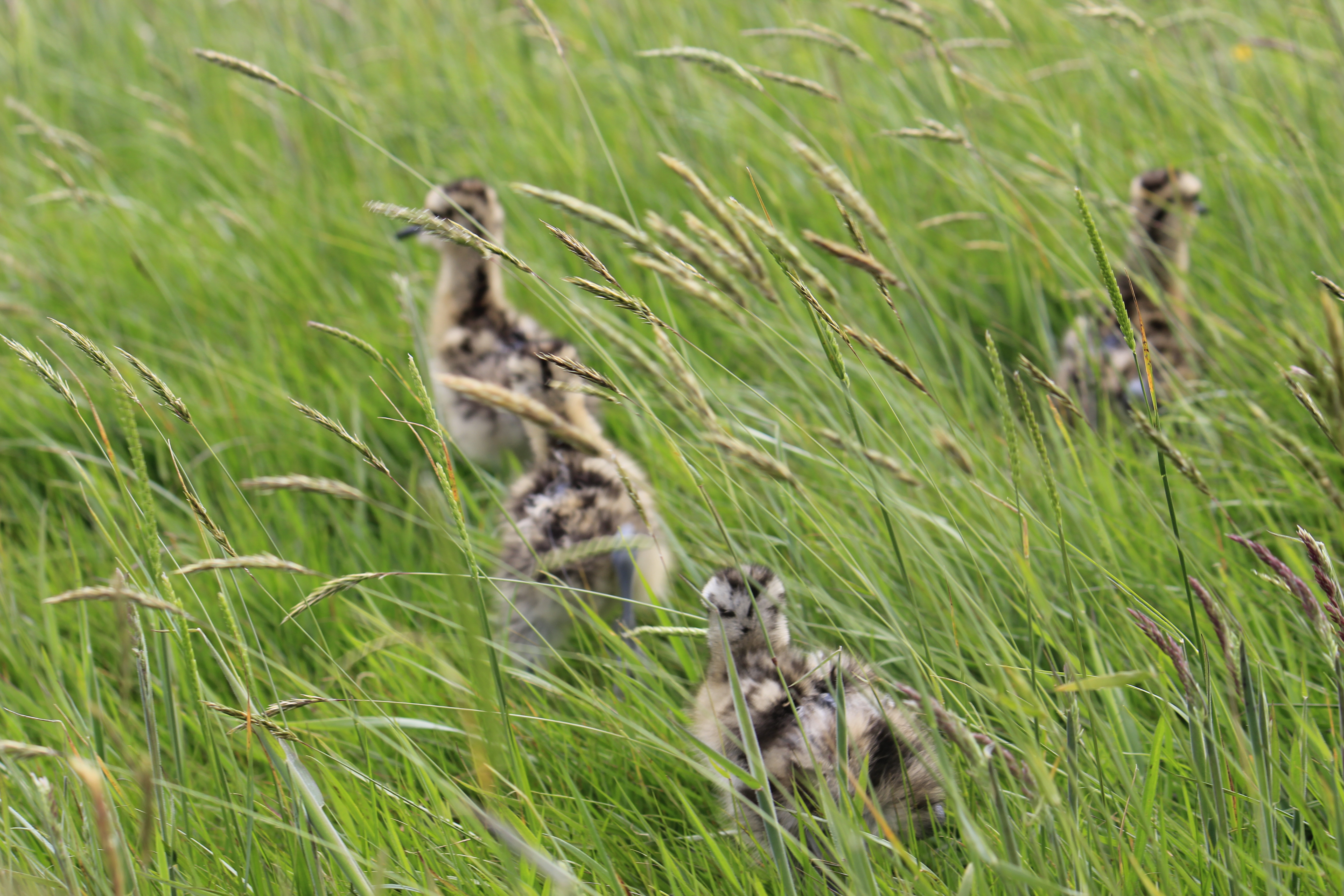 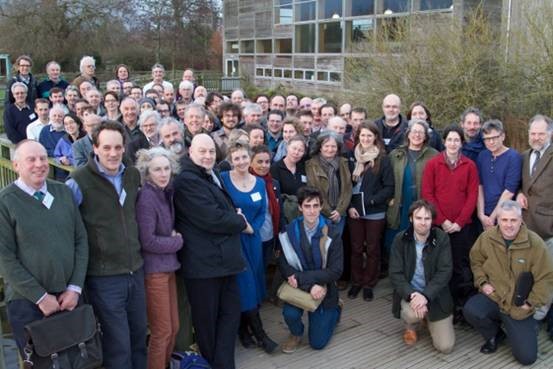 On Monday 22nd May, Mike Smart from the ‘Call of the Curlew, Slimbridge Symposium’ group visited the project. Mandi and Tony had […] 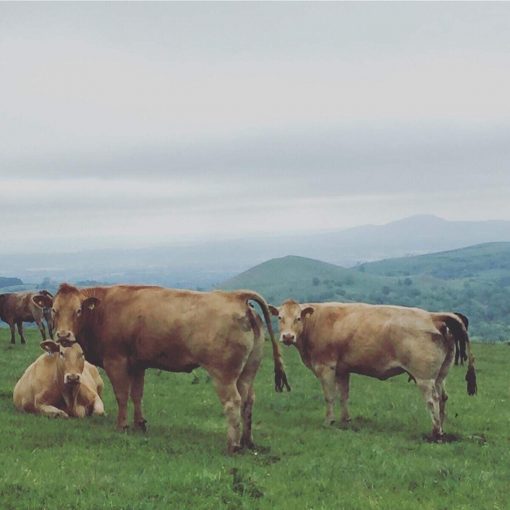 Now lambing season has come to an end; the ewes are all sheared, we’ve carried out all of the work on the […]