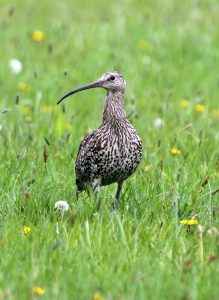 Curlew Country is at the heart of the local community. Land managers enable us to carry out close observation of nests on their land and interventions that aim to reverse the lack of breeding success in the local curlew population. Possible curlew territories have been identified by local volunteers over a number of years. The season then starts in earnest with the Curlew Country team out in the territories looking for the curlew nests, that are notoriously difficult to find. Farmers also find a few nests each year and are very keen not to disturb breeding birds if they know where and how to avoid them.

In each of the years 2015 and 2016 only 3 nests out of over 30 nests monitored survived beyond egg stage to hatch chicks, but none of the chicks survived to fledging.  Once the chicks have hatched, they are fitted with radio tags, but to date the chicks have been removed too far away from the nests for there to be a good indication of what may be needed to help them survive.  At egg stage the nests have failed mainly due to fox predation (over 50%.) Badgers predated just under 25% of nests and the remaining few have failed due to a range of circumstances including trampling by livestock and crow predation.  When found, the nests were protected from usual farming activities, such as rolling, harrowing and mowing.

In 2016, the 3 nests that survived mammalian predation were all surrounded by temporary electric 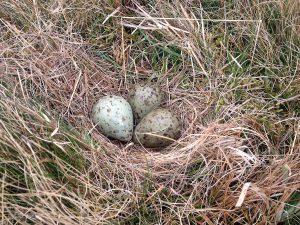 fencing recommended to us by partner, the Game and Wildlife Conservation Trust (GWCT).  GWCT knew of a similar curlew project in Germany, run by Natlalie Meyer of NABU, who had trialled electric fences around curlew nests as predator deterrents for the first time with some success. In 2017 our interventions to reduce predation, included electric fencing and fox control. This resulted in many more chicks successfully hatching from natural nests successfully, however the number of those that fledged was still very low and only in areas where lethal predation control was active.

When the chicks have hatched, they leave the nest after only a couple of days, in search of insects and other invertebrates to eat. They are very vulnerable to predation at this time, and will travel across large areas in search of food, making them difficult to protect.  The chicks are radio-tagged, but often lost out of range, presumed predated, so unable to give an accurate picture of what the main factors are. Curlew Country works with farmers to try and save chick broods whose whereabouts are known. 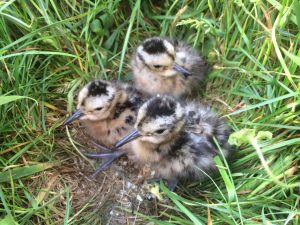 In 2017 Curlew Country was granted the first UK licence to headstart (incubate eggs and rear chicks).  Having discovered that the fences increased hatching rate dramatically, it replaced the eggs into the nests at pipping stage, but all the chicks, apart from some protected by traditional predation control, were lost.  In 2018 Curlew Country started to rear the chicks following egg incubation.  21 chicks were fledged into their natural environment using this process (a 210% increase on the number fledged in the two initial nest monitoring years 2015 and 2016). This work was all carried out on a shoestring.

In 2019 we are delighted to be partnered in our headstarting initiative by avicultural experts, the Wildfowl and Wetlands Trust (WWT).  Their support brings much improved technical equipment alongside on site avicultural staff.  WWT has experience of headstarting waders through its work with Black-tailed Godwits. Curlew Country and WWT are hoping that the technical boost will result in an even higher egg to fledge success rate.  Avicultural experts at Chester Zoo have also been keen to support the project with manpower and gain experience of headstarting waders.

Headstarting is a desperate conservation measure to save the curlew population.  It will not solve the longer-term problems of:

Please help us to save this species through achieving these measures for the longer term.

Click here for a background to the project including the nest monitoring reports.

Click here for an outline of what we are doing and what we hope to do.