What is needed now:

What has been achieved since the Curlew Country Project began in 2014:

Curlew Country was originally one of 15 projects that formed the Heritage Lottery funded, Stiperstones and Corndon Landscape Partnership Scheme (LPS).

The project designed for the LPS was about advising farmers on habitat management to improve success of breeding curlew.  Initial findings were that the original project design was unwelcome to farmers. They did not like the ‘top down’ approach and suggested that it was pointless doing anything about habitat management until predation control was taken seriously.  The farmers indicated that they were very keen to work with the ‘right’ people to support ground-nesting birds.

A Project Advisory Group was set up to advise on technical issues and to help plan nest monitoring work on the ground.  Curlew Country asked farmers and land managers to become partners in the project and to help it discover the true causes of nest failure through nest monitoring.

Funds were raised to employ an ornithologist, buy nest cameras and data loggers. 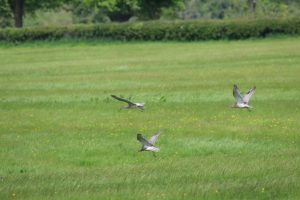 No monitored nests fledged any chicks.  All were lost and predation was the major cause.

Three nests hatched out chicks, all of which were surrounded by protective electric fencing. All were subsequently lost to predation when they left the fenced area.

A minimum of 3 chicks fledged from natural nests and 6 from headstarting activity. 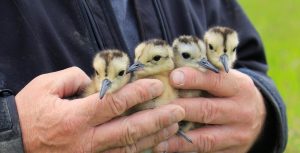 You can find each years nest monitoring reports here.