In an exciting turn of events, and another first for Curlew Country, one of the six headstarted chicks released in 2017 has been spotted back in Shropshire. 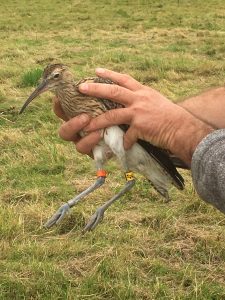 In an exciting turn of events, and another first for Curlew Country, one of the six headstarted chicks released in 2017 has been spotted back in Shropshire. Ornithologist Tony Cross was supposed to be taking a day off to spend time with his mum, however he managed to sneak her out to look for curlew at local hot spot sites. After picking up his scope to read a ring, it was with great excitement as he recognised the two-letter code as one of our reared chicks. It is very much a family affair, as Tony’s Auntie Jean (an experienced poultry rearer) supported the project during the initial two years following the successful licence application to incubate eggs and rear chicks.

The curlew in question was a result of the first year of headstarting for the project, which originally planned to put all eggs back into nests at pipping stage. The nests were predated so quickly once eggs hatched, that circumstances led to 6 eggs left with no nests to return them too.  The eggs were hatched, and the chicks reared in captivity and released at Dolydd Hafren. This site was chosen as it is a migratory stopover point for large groups of curlews. The location of this bird’s territory works out at approximately 7km from the rearing site, and around 21km from the release site. Since this first sighting, when the 2-year-old curlew was witnessed displaying breeding behaviour, Tony has gone on to find the nest. The return of this curlew is fantastic news for the project and brings a glimmer of hope and reassurance that the headstarting efforts are not in vain but could offer a real boost to our dwindling population.

Back to News Posts Here…