‘Whan the sunne shinth make hay. Which is to say. Take time when time cometh, lest time steale away’ English proverb first recorded in 1546.

There is a summarised version of this blog over at GWCT. 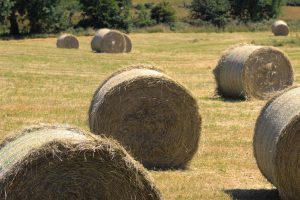 Twitter and Facebook have been increasingly reporting instances of silage and hay cutting during the past few weeks and views have been expressed on the possible consequences for curlew.  The hot sunny weather has enabled farmers to take an early crop as the grass has grown and ripened well and must be cut, turned to make sure it is dry and harvested in fair weather.  The urgency of gathering in a good crop is not just about the weather. Grass to be fed to sheep and cattle during the long winter months will ideally provide the optimum nutrient requirement. This happens at a certain growth stage and of course this in turn is weather dependent and at a different date each year. Farmers pushed by the public demand for ever cheaper food aim to cut and preserve a crop which will encourage the best growth rate and muscle to fat ratio in their livestock.

This year the long and harsh winter weather caused many farmers to run out of fodder crops and they were forced to buy in replacements at high prices. This has led to inevitable loss of income. Grass crops cut early in the season enable the grass to grow sufficiently for another one or more later crops to be harvested and stored for winter feed. The dry weather will limit grass growth, so all needs to be done to maximise the benefits from an agricultural crop.Farmers are reporting that their grass crops are beginning to wither from lack of moisture. Last year crop condition was lost when crops were not cut in the fine weather in July. Following the period of rain that followed, I know of farmers that lost the crops altogether. 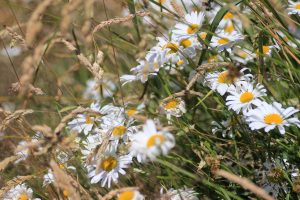 Traditional hay meadows would have contained species that thrived on a comparatively nutrient impoverished soil.  Meadow flowers and grasses would not have reached cutting stage until much later in the year – late July or August and only one crop would have been harvested. The flower and grass species in a traditional meadow would have supported a similar wide range of invertebrates upon which ground nesting bird chicks rely.

It is Curlew Country’s experience that farmers will not harm a curlew nest if they know where it is.  Farmers are very keen on ground nesting birds and want to see them return to a viable population.  We do however have two farmers in our trial area who do not support the project (one says he will call the police if we step onto his land). This year we spied a nest on land that this farmer takes a crop from and told the landowner, but were upset to see the field rolled, with the inevitable consequence of nest destruction, the following day.  North Wales and the Severn and Avon Vales have similarly reported incidences. 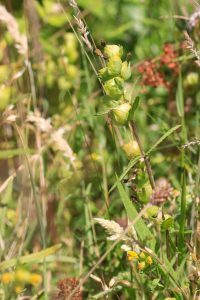 The social media cry has hastened to call for a ban on cutting crops before certain dates and asking why more curlew nests cannot be saved from such agricultural activity. Under agri-environment schemes the crop could not be cut for a few more weeks until mid-July, but not everyone is in an agri-environment scheme.  If the schemes had worked and were simple to construct for nesting waders, and curlew in particular, we would have plenty in the lowlands still. The local agri-environment scheme cutting date would not save most local curlew.  Last year farmers wanting to cut grass in early July when it was ready lost money by delaying and then not having fine weather for harvesting again until late August.

In the past it has been suggested that mowing protocol may help.  Mowing was advised from the inside of the field out to drive out curlew chicks into a neighbouring field or alternatively in strips across the field starting at the furthest point from where the curlews were thought to be.  Our experience is that curlew chicks do not move out of a field or away from a threat, such as a forage harvester or mowing machine.  They hunker down and try to hide in the sward.

In the last few days the project ornithologist has been to rescue some curlew chicks from mowing which was to take place on a given date.  The adults nested on a field belonging to one farmer who gave permission for a protective electric fence to be erected.  The four chicks hatched from the eggs and predation control was active in the area.  The family of curlew moved to an adjacent field in which adults nested last year.  The farmer who owns this field is exceptionally keen on protecting the curlew.  Last year, the project had sufficient funding to compensate farmers who lost income through supporting curlew. This farmer lost several thousand pounds on delaying the cutting of his crop refusing to take the offer of compensation for loss of value by delaying cutting.  Even this farmer came to a point in August where he could not delay cutting further or he would face complete loss of crop. 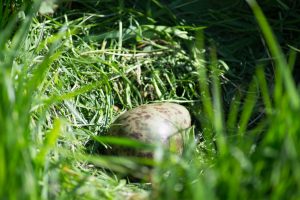 At this point the remaining chicks were about to fully fledge, flying well but had not set off on their migratory journey.  This year the crop was sold, but the farmer did not do this until he knew that the curlews were not nesting on his land again.  He was disappointed that they had not returned and had been willing to sustain a similar loss to help them.  He was delighted when they returned to forage and kept a close eye on them as far as he could.  News of the proposed cutting date came through and preparations were made to visit to save the chicks.

Several members of the Curlew Country team who had been keeping an eye on the curlew family witnessed or radio-tracked them to the field during the week before the cutting date. Farmers around the field with the curlew family in began cutting their grass. Student Billy Clapham who has been filming with the project this year has got some great footage of the curlew family fending off the many avian predators such as buzzards, red kites and crows that are attracted to a grass cutting site. A mown field exposes a food source at the base of the mown grass, but also attracts high numbers of predators to vulnerable species close by. Billy commented that it was harrowing to watch the adult curlews having to work so hard over a long period of time, to protect their chicks from red kites hunting.

Over the weekend more grass was unexpectedly cut by another neighbour, but the curlew family had not been seen or radio-tracked to that small field, nor did the curlew family visit it last year to our knowledge.  The ornithologist arrived to radio track the chicks and keep them safe during the cutting period.  We may have had to have done the same when the crop was turned and baled all on separate days and possibly with limited notice as farmers cannot always predict what the weather will do.  Our minor problem was not however prolonged and turned into a much larger one as the chicks had disappeared and the behaviour of the adults suggested that they may have been mown up in the adjacent field.

This curlew family ranged over an area of at least 40 acres (16 ha).  They were more observed by people wishing to protect them (mainly the farmer) than any other birds in the project this year.  Last year one of the Curlew Country chicks that fledged had foraged with its family over an area of about 60 acres (24 ha).  Saving that curlew family cost £3,000 when they were located to a fraction of that area and the mowing was stopped. 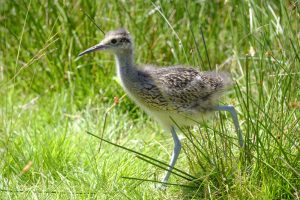 An agri-environment scheme compensating farmers for loss of income in this case would involve three farmers and there would have been no predicting which three farmers that might be before the nesting season.  It will be challenging but not impossible to provide a basic level of support at landscape scale for delivering wildlife benefits such as supporting breeding curlew and reward people for results.  We must not jump to conclusions and tick the wrong box.

The solution is detailed and complicated whilst we take positive action to save curlew through boosting numbers now, we must also do the best we can to get things right for a sustainable future for them.  Survival of lowland curlew is dependent upon farmers land managers.  Fortunately, the majority of them are as keen as anyone else on a workable plan for wader recovery.  We need to stop alienating farmers and blaming them for meeting our insatiable demand for cheap food.  If we arrived at work and were told that the rather rare and precious creature that needed to be saved had taken up residence locally we might feel pleased.  How would we then feel about a cut in our salary and a complete re-design of our workplan for the foreseeable future?   Positive partnerships between land managers, conservationists and communities and a pragmatic approach will be the methodology for achieving the common goal of keeping a viable curlew population in lowland UK.