Throughout the year, Curlew Country is contacted for advice by many people wanting to help Curlews. During the breeding season these requests escalate.

We want to help others but we are such a small organisation having to put so much effort into fundraising, that it is not always easy to give this advice. We are trying to accommodate requests by running training sessions but struggle even to deliver this additional work.

Last evening, I had a typical urgent plea for help from a farmer wanting to mow a hay crop but thinking that there were chicks in the field. He had found a nest and gone to mark up an area around it to save, only to find that the chicks had hatched. He could see adults in the field and from the behaviour that he described there were almost certainly chicks present as well. 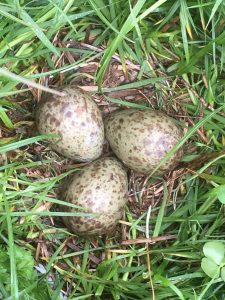 need both predation control and suitable habitat in which to nest and forage. When it comes to mowing a crop with chicks in, many farmers will not be able to find the chicks, will risk harming them if they do try to find them and will then find that the amount of crop to be sacrificed in order to save them is unsustainable for the farm business. Even if saved by the mower the chicks will still be vulnerable to predation, if there is no predation control in the area, more so in a field or fields mown with no cover for them to hide in.

It is distressing to talk farmers through the implications and the limited chances of success, and yet alone the cost that they may face. Some start pleading with me to give them a solution as they are so desperate to save the chicks but cannot withstand the financial loss of leaving some or part of a crop of grass un-harvested. I can advise them on measures which may help, but it is depressing for all to know that, for all but a few chicks, their fate will be a sad one.

I have today had another telephone conversation with someone else requesting advice. This person has managed to effect habitat improvements over quite a large area but suspects that Curlews are not surviving due to predation. If accidental agricultural disturbance or destruction does not occur, then they are equally likely to be predated. Of the 30 nests which Curlew Country monitored in 2015 and 2016, protected from accidental agricultural disturbance, only 6 nests got beyond egg to chick stage and no chicks survived to fully fledge.

We are sad to report that the Curlew Cam chicks are lost presumed predated. The chicks hatched on Wednesday 3rd June and were radio-tagged the following morning. They remained close to the fenced area on Thursday and were found again in the field on Saturday 6th June. By Tuesday 9th June, we were unable to locate them. The adult behaviour was irregular, but not definitely confirming the loss. Subsequent chick finding trips have not been successful and adult behaviour has confirmed the fate of the chicks. The radio tags, like so many have not been found, taken out of range or underground, so it is not possible to identify the predators either.

After 5 years of work we are more accustomed to this sad news, but we are desperate to help Curlews survive and to give chicks a future. Our pioneering head-starting work, (incubating eggs and rearing chicks) was started to save our local but significant population from dying out. Our farming partners are keen to do the same. Please help us to give our Curlews a future by donating to the Curlew Country project. We do not have enough funding for next year, but regular monthly donations will help us to underpin the project in the race against time to stop Curlews becoming extinct.