During Mental Health awareness week, our regular farm blogger, Rhian Pinches, sent a heartfelt blog on the issues facing farmers.  It got trapped in the system somewhere, so it is a little late. 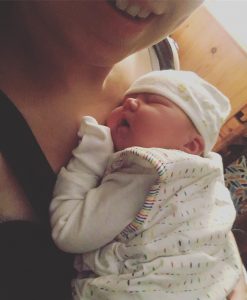 Rhian mentions that she is expecting a new baby and we are delighted to announce the arrival of baby Hattie on 19th October weighing 9lbs 5ozs.  Mother and baby are both doing well.  To accompany her blog Rhian sent photos of her first daughter Phoebe who is out and about helping her mum much of the time. (Note from project manager, Amanda Perkins)

As mentioned in my previous blog post, I would like to base this post on a subject which has been publicised tremendously recently (particularly this week) and that is Mental Health Awareness, particularly in agriculture. FACT – MORE THAN ONE FARMER A WEEK DIES FROM SUICIDE IN THE UK ALONE.

There are many millions of reasons in each individual’s life, for them to become low and depressed and unfortunately for too many, this can lead them to turn to life destroying methods of ‘coping’ such as drink and drugs, and even suicide. Have you seen the picture floating around social media of all the empty pairs of Wellington boots? To display the lives of those who couldn’t cope with the modern pressures of British agriculture. It’s a soul-destroying image that we all need to keep in our minds. Our lives are worth so much more than an empty pair of welly boots. 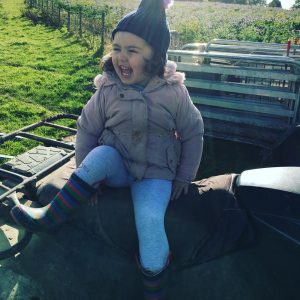 Not just as farmers of the UK, but as part of the population of business owners, Brexit is a deep, underlying and worrying concern; Should we be diversifying now? Can we justify maintaining our livestock population this autumn with the uncertainty of what our stock will be worth in 12 months’ time? Is it really viable to change machinery?… these are some of the questions that we have around our kitchen table and I’m sure that we aren’t the only ones feeling that way. There is no answer to our questions as far as we can see, so what else can we do but to continue to run our business as always and act like sitting ducks in preparation for changes, if any, causing a stress and a pressure on daily practices, making us question everything we do. In my opinion, the favourable approach is to just keep the cash flow moving, so for us, the means selling our fat stock and replacing our breeding stock. Now, with the low cattle prices and the time of year combined, we are up to £200 a head down on our final product. The replacement couples of cows and calves have also taken a fall, meaning that we have been able to buy in some decent outfits that match the correlation to the fat stock. 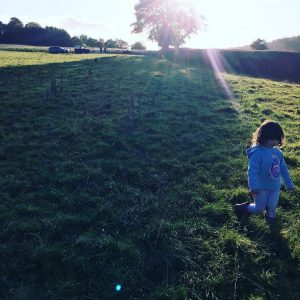 However, with the breeding ewes this has been a very different story. We have been focusing on selling our lambs ‘in the fat’ as always, before they have had any additional feed other than grass, nor additional wormer’s etc. The lambs sold so far have generally been 44/46kilo in weight and making between 170/180ppk in general (in money terms, around about £75 before commission). A friend of mine, who is a fantastic sheep farmer and breeder, has been selling his quality ewe lambs for way over £100 on most bunches, some reaching a staggering £148 per head. When he rang to tell me the prices he had reached, although over the moon for him that his very hard work has paid off, the first thing I asked was ‘what the hell are the price of breeding ewes then?!’ to which he replied ‘you might want to sit down!’. He was right, I did need to sit down. The replacement ewes that we normally buy in are generally what I would call ‘cheaper sheep’. I wouldn’t be looking to spend more than £112/15 per head on yearling mules, meaning that I will never have the biggest ewes, but that I can generally find pretty enough ewes to suit our ground, that will yield efficiently for that figure. This year however, because the best ewes have been so sought after, many easily reaching £145/50 per head, this has bumped up the price of the cheaper classes of sheep also. I just can’t see a strong enough reason to spend anything like that at the moment, so we have decided to buy in a large bunch of older, hardier ewes for around the same money per head as our fat lambs. We intend to breed from these over the coming years to help produce our own, ‘hard flock’, but the main reason for this action… is cash flow. I want to maintain our headage without the extra costs. 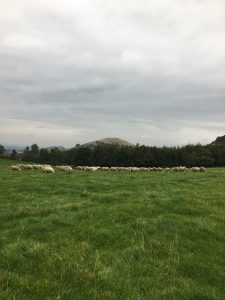 So, heading back into the realm of mental health, I would like to share something that really took its toll on me this year, which I call, propaganda against agriculture. Firstly, we had Veganuary. So for those who may not be aware, this was an abbreviation given to the month of January to encourage people to avoid meat and try and kick start their New year on a road to plant based dieting. Now, this really caused me to struggle. I couldn’t help but bite back on posts I read on facebook and twitter, as I saw people be sucked into this fad, which could only be described as a backlash towards livestock farmers. In fact, it drove me so angry reading through hundreds of false stories about how farmers are murderers who enjoy killing animals and that we are trying to poison the population and such ludicrous tales, that I actually ended up making myself ill and finding that it was due to high blood pressure which was sparked by spending so much time wound up! Veganuary triggered TV shows and advertisements all based on plant-based dieting and it felt like everywhere you looked it was being rubbed in your face as a proud member of the Ag Population. Now, I know I speak on behalf of every livestock farmer in Britain when I say that this was the negativity that we really couldn’t afford. It has encouraged very worrying times, especially in recent months where in addition to this, agriculture has been targeted as a key factor to increased climate change. Is there any wonder that mental health has become a large concern in our industry when we wake up in the morning and these allegations are thrown at us on the news, social media, the papers and so on? 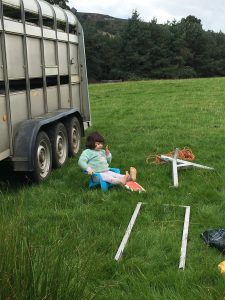 Thankfully, many scientists and researchers are bringing the facts to light in our defence, announcing that in actual fact, livestock is fabulous for our ecosystem and actually, meat is good for us. Who would have thought it, that two of the massive factors that moulded our evolution are good for us! My key argument has been that these hills that we farm, we shape and we maintain are a delightful and special ecosystem supplying a cycle of natural fertilisers, low input but quality food, and clean air with special pockets of wildlife. For example, our work that goes into providing security for ground nesting birds such as the Curlew. Our practices as livestock, hill-farmers find safe-havens for an array of different species, from our hedgerows, to our ponds and our flowerbeds outside the kitchen window! It’s all something I become very defensive and argumentative over! 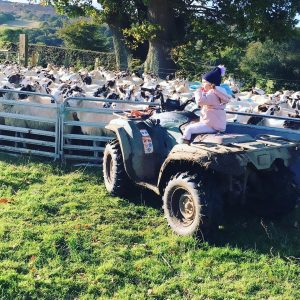 I ought to be rounding this off to a close now, but I think it’s impossible to talk about mental health in agriculture, without highlighting the ongoing depression of TB. It is a topic that haunts many farms across the country and has many farm sales to answer to. Members of our own family have had the livelihoods of their cattle enterprises destroyed and brought to an end through the devastation of TB and although said family member coped well with the ‘shut down’ of his herd, you can see how it can so easily be soul destroying. Just the thought, to feel so helpless that you need to give up on a lifetime of building a herd up, really chokes me. I adore our cattle, and although we have been TB free for over a year, we are due for our TB whole herd test before long. I feel anxious and nervous about the test but it’s something that we have no control over and just have to face. I’m made ten times more nervous than normal as my second baby is due tomorrow which means all being well, we will be facing some busy days moving and manhandling the cattle with a new-born baby in tow… I will have to make sure that childcare is arranged for my two year old on those days at least! FACT – MARCH 18 -19 SAW 43,937 CATTLE SLAUGHTERED DUE TO TB WHICH WAS A 1.3% INCREASE ON THE PREVIOUS YEAR 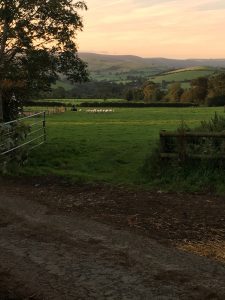 I must admit, in my scribbled little drafts for writing this post, I had pages and pages expressing my feelings towards veganism, pollution, suicide, money worries and much more. However, I think we are all capable of having these angry emotions and the main thing, is to remember we always need to talk. Those scribbles were my way of ‘talking’. I find it easier to moither on paper than I do to speak to people about my concerns in life, even though I know I have so many people that I am able to turn to. Whoever this reaches, whatever your age, gender, profession or belief, please make sure that you always have someone to talk and rant and vent to when you need to release some of your built-up pressures in your minds.

About our blogs
We publish several blogs from across the Curlew Country range of activity. These blogs are often written in a less formal style and may contain views that are not those held by Curlew Country or the GWCT.  We welcome the breadth of views which reflect the realities of managing our countryside.