In 2017 and 2018 Curlew Country carried out headstarting of curlew, a first for the UK. In 2018, 21 chicks were successfully released at fledging stage, some of which have since been spotted on the south coast within larger flocks. The headstarting was carried out in house, on a shoe-string budget, after 2 years of research showed no chicks fledging from over 30 nests monitored. The 21 chicks raised and released was a great result for the project, however we had some eggs which failed to hatch, and chicks that didn’t make it, prompting us to take steps to try and increase the overall egg to fledge rate.

This year we have partnered with the Wildfowl & Wetlands Trust (WWT) in order to make this happen. They have provided specialist and upgraded equipment, as well as providing two avicultural specialists, Rosie and Anna, for the duration of the season. Further support has also been provided by Chester Zoo, with avicultural specialist Jenny assisting for two days a week. Finally, our own project assistant, Amber, has also been helping the team 2 to 3 days a week. Together these four specialists make up the avicultural team, bringing together expertise and experience from a wide variety of different places. Here we have asked each of them to tell our supporters a bit more about themselves, and their involvement with Curlew Country. 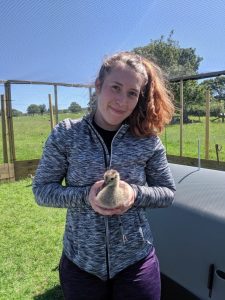 Having studied Countryside Conservation at Aberystwyth I am so pleased to be working within the conservation sector. I have worked as the Curlew Country project assistant for the past 3 years, having previously taken part in voluntary ground-nesting bird surveys. During this time my job remit has changed dramatically, although it has always been wide and varied. Out of season I spend much of my time updating the website and social media, as well as assisting with creating information for farmers, funding applications and organising training events or presentations. In addition to working for Curlew Country, I lead outdoor education sessions for Staffordshire Wildlife Trusts, working with schools and other groups to learn more about the natural world. In my spare time I survey for Dormice with the Shropshire Dormouse Group or check up on Pied Flycatchers in nest boxes at a local site.

During the spring everything revolves around finding nests, with all hands (or eyes) on deck in order to cover as many of the local territories as possible. 2018 and 2019 have been slightly different, in that headstarting has become one of the main objectives for the project. Having the help of these other knowledgeable aviculturists this year has been such a blessing, and I feel like I have learnt so much from them in such a short space of time. In particular, learning more about the incubation process itself has been fascinating, and something I hope to do more of in the future. Everyone has worked so hard to give these curlews the best possible chance, and I can’t wait to see them step out into the world and take their first flights. 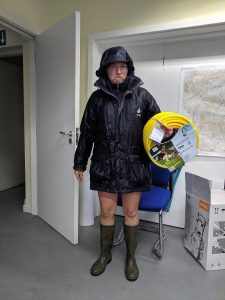 Ever since I was a child I have been fascinated by birds, eggs and incubation, saving up my pocket money and buying an incubator at the age of 11 and starting up my own quail business. I self-funded travels to different continents for 2 years, working mainly with crane species but also learning several invaluable medical/hand rearing skills rehabilitating wildlife.

This helped me to secure my current position working for the Wildfowl & Wetlands Trust as a Conservation Breeding Aviculturist. I have worked in this role for 2 ½ years now, spending most of my time at our off-show facility at Slimbridge in Gloucestershire, looking after our captive populations of Baer’s pochard, black-tailed godwit, and spoon-billed sandpiper. I spent the first two breeding seasons as a WWT aviculturist on Project Godwit, headstarting black tailed godwit by collecting godwit eggs from wild nests, rearing in captivity and releasing fledged juveniles into the wild. This is where I have learned the majority of the critical wader rearing skills needed to assist Curlew Country in increasing their egg to fledge ratio.

For the past 4 weeks, whilst the chicks have been hatching and we have been nurturing young birds, I have utterly lived and breathed all things curlew. Working so closely with these incredible birds, becoming so familiar with their behaviours and individual characteristics as they grow, has given me a personal connection with the desperate plight of the curlew. 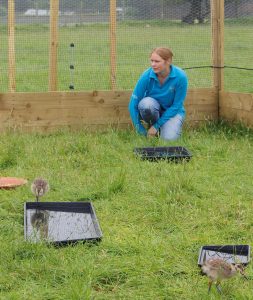 I’m Jenny and I started working at Chester Zoo in September 2018 after moving up from Newquay Zoo in Cornwall. I have always had a passion for wildlife and as a child growing up would much prefer pond dipping in the garden to being inside. This year as Chester Zoo are collaborating with Curlew Country, I was lucky enough to have been sent two days a week to support the Curlew Country aviculturist team.

At Chester I work on the Incubation and Rearing department and throughout my career have been able to gain experience in the husbandry of a number of different bird species. Working with the curlews at Curlew Country has been a great opportunity for me to learn about the care of a new species, with the bonus of being able to work directly with birds that will be released back into the wild.

Conservation is really important to me and being part of an organisation that is making a real difference is the reason I love my job and I have thoroughly enjoyed assisting in this awesome project. So far, I am really proud of what we have all achieved at Curlew Country and it will be a great day releasing the headstarted chicks back into the wild! 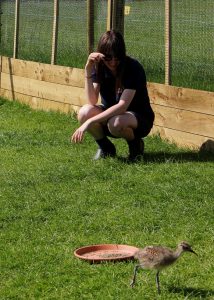 the wild and rugged north-eastern coastline, equipped with my Nanna’s equally rugged copy of Reader’s Digest Birds of Britain. It was out there in the shallows and mudflats that I would first hear the distinctive call of the Eurasian curlew.

I first came to realise conservation aviculture was my vocation in a voluntary role as Aviculture Assistant at the WWT Washington Wetland Centre. During this time, as well as general aviculture duties, I worked on intensively hand-rearing another, very different kind of ‘wader’ – Chilean flamingos! Inspired by this work and WWT’s work on endangered species reintroductions, I studied conservation at university to complement my experience in aviculture. Later, I volunteered as an Aviculture Assistant at another of WWT’s wetland centres – this time at Slimbridge in Gloucestershire – where I gained first-hand experience of WWT’s leading avicultural practices with a wide range of wildfowl during the busy breeding season. All this experience equipped me with the knowledge and skills essential to work on this project with Curlew Country.

The opportunity to work closely with curlews is greatly exciting to me both professionally and personally as this species was one of the first which I became familiar with and their plight remains an inspiration to me as a burgeoning bird conservationist. Implementing the knowledge and skills I’ve developed thus far into a pioneering headstarting project for the species is a dream come true!