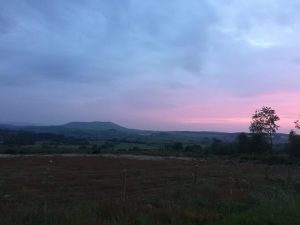 The haunting cry of the Curlew crept into my childish soul without my even noticing. My father kept a boat in Poole harbour, which involved hours of waiting around for his disinterested offspring. On cold winters days, I would sit in the car after primary school, while he scraped or painted or fought with wind-born tarpaulins, my head resting on the opened window surveying the endless grey mudflats, the silvery bubbling call of the curlew a common accompaniment. We didn’t think anything of them then, they were everywhere, they were common, didn’t value the elegant balletic shape or it’s delicate beak probing in the mirrored sky.

I studied music in London, and then years later, grown up and married, I returned to the peace of the 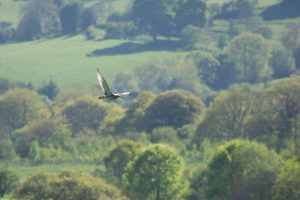 West Country and moved to north Cornwall where I started walking my dogs along a deserted beach one early Spring. I would have to restrain my dogs on their leads because of a large flock of birds busily chattering and crouching together in the glistening foam. Amongst the crowd of gulls and turnstones and oyster catchers wandered several curlews, only noticeable from the occasional familiar haunting call that could be heard above the roar of surf to stop me in my tracks. I would have them all to myself as I stood listening on the sloping pebbles, a treat of damp air and watery music as the lines of sunlight slipped below the horizon’s folds.

Life carried on as it does, oblivious even to terrible changes out of our immediate sight. Until last autumn, when I was stuck on a train from London and read an article about a woman, Mary Colwell, who had written a book bemoaning the catastrophic decline in numbers of this bird, that I had until then, so totally taken for granted. Surely, she couldn’t be right? I wracked my brains as I tried to remember exactly when it was I had last seen or heard one. They were all over the place I was certain, I saw them regularly on the beach, but then as I waited for my station to arrive I worked it out- for various reasons I hadn’t been to that beach for a long time, I hadn’t seen or heard a curlew for years. But surely, ‘our’ curlews, these precious delicate creatures with their mournful cry that echoed far back into my childhood, would be safe, they would be there? 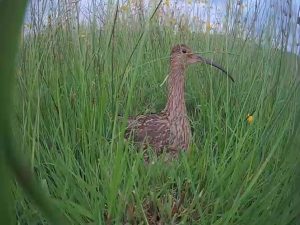 I returned to the beach in question at the first opportunity, and with my now elderly dog who no longer needed restraining, we walked along the familiar shore. The slope of the pebbles, the surf’s roar, the crumbling cliffs were all as if nothing had changed. But this time there was no crowd of birds busy about their feeding at the surf’s edge, there were no haunting calls to hold me still and lift my spirit to that mysterious and beautiful place that natures sounds can take us to so randomly. Several further visits yielded no more sightings, the curlews had simply gone. I was honestly, profoundly shocked.

I began to read everything I could about these birds to understand how this disaster could have occurred, the threads lead back to some familiar themes woven tightly into humanity’s bitter tapestry of destruction of the Natural World. Land use, industrial scale farming practices, loss of habitat – the same mixture of causes responsible for the loss of many other cherished birds. I came across the old legend of the ‘Seven Whistlers’ from at least the 16th century, where the sound of the curlew evidently inspired supernatural if not spiritual feelings and ideas. In an age where population densities of curlew were undoubtedly much greater, and understanding of their behaviour negligible, people would hear them often at night as they flew and ascribed these ‘wailings’ to spirits that foretold a death or calamity. Sailors, Fishermen and miners would refuse to go to their jobs if they heard ‘the Seven Whistlers’ the night before. A seriously superstitious population took note of such things and acted on them. 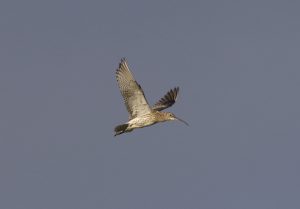 an incredible irony. Their loss and those of so many other native birds does indeed predict doom for the human race. Humanity cannot survive on this remarkable ecosystem called Earth, without ALL of the intricate and complex web of life here, much of which we still don’t understand and yet are rapidly sending towards extinction. In the ‘Biosphere 2’ project (an artificial ‘planet earth’ built under a glass dome in Arizona, and developed for colonising other planets), some of the artificial ecosystems installed inside failed, and the world’s top scientists were forced to admit that a lack of understanding of how the planet’s ecosystems work together was to blame. It’s a lesson on how little we know about these systems on which we depend, and the vital importance of their interconnectedness, and yet despite this, we continue to destroy and threaten a terrifying list of species we share our planet with.

So, as well as the Curlew which was the main inspiration, I decided to include some of our other most beloved and threatened birds in my song about the Seven Whistlers, the turtle dove, skylark, Sparrow, Lapwing, Woodcock & Nightingale are all birds that were considered common in my childhood but now severely threatened. This way I have woven them into the original legend and yet brought another meaning to their being a symbol of doom for the human race. A doom which we will most certainly be heading for, if we continue to disregard their, and so many other species plight, in the next few crucial decades.