The following blog was written by film student Billy Clapham, who joined the project in 2018 in order to create his film ‘Keeper of the Call’. The film follows farmer Wynford Jones in his efforts to protect the curlew on his land, as well as the work of the wider project. To watch the film, click here.

I have felt so lucky to have spent the best part of the last year, constantly thinking about
curlews. For my MA thesis in Wildlife Filmmaking, I wanted to shed light on a story right
here in the UK on a bird that so often slips under the radar and doesn’t get the attention it
truly deserves. I am so glad that now I can say the film is finished and can be shared far and
wide. 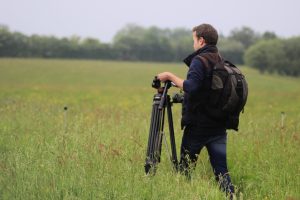 Earlier this year, Mary Colwell pointed me in the direction of an ambitious independent conservation project that worked with farmers to try and save the curlews on one of their very last lowland strongholds. Growing up around the industrial farming landscape of Lincolnshire, trying  to make our farmland more wildlife rich has always been something I have felt passionately about. Hearing about this inspiring little project, I knew straight off that I wanted to make the film with Curlew Country and I wanted a farmer to take the lead.

Over the ensuing months, I spent my time bouncing between my base in Bristol and the gorgeous Shropshire/Welsh borders as I made the film. I quickly learned how real and
extraordinary the challenges are that breeding curlews face in our countryside and how
conserving them is a deeply complex and difficult task. A difficult task that Curlew Country
takes on with gusto and have begun to make real change. I knew I couldn’t fit all this
complexity into a short student film, so with this documentary, I simply wanted to show
people a slice of what life is like for these birds and the people trying to save them.
Hopefully that way it becomes clear how in trouble they are and how much they are worth
saving.

Saving the curlews will be a challenge, but their stunning call and graceful understated looks
are part of the soul of our countryside. Being there in spring and not hearing the bubbling
cry of the curlew would be a tragedy. I just hope that in some way this film helps their
plight. 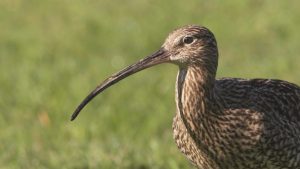 I would like to say a massive thank you to the team at Curlew Country for welcoming me into their project with open arms and allowing me to capture what they do. Amanda Perkins
made me feel part of the team.
Another huge thank you goes to Wynford Jones for doing something a bit different in his retirement and taking on the starring role with endless patience and generosity. Many other people were a great help too, from the other farmers who allowed me to film on their land,
to Ben Osbourne for being integral to me getting shots of curlew behaviour and to everyone
back in Bristol for helping to make the film as best as it can be. Thank you also to Ben
Mowat for providing the unique and beautiful music.