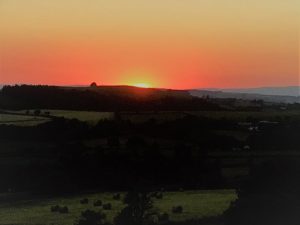 Our first batch of babies have flown. The egg forms were only in their nests for a short period before they were collected by the Curlew Country field ornithologist, Tony Cross, and placed in an incubator to hatch about 30 days later. We are not supposed to be emotional, but a mixture of relief that a good number had got to this stage and anxiety for their future meant tears were shed by the chief carers. The decision to allow release was difficult. The birds were ready to go and in danger of damaging themselves on the side of their enclosure as they attempted to fly. The ground outside was sunburned brown with fewer damp patches and food sources available to them than a more temperate year. As more birds tried to fly higher and longer distances in the enclosure and the forecast was not for rain for some time, the decision was made.

The timing of administration matters early on meant that the curlew breeding season was upon us when we were barely up and running in the new project format, with limited planning and set up time. We learned that incubators designed for other birds did not turn the eggs properly and we had to turn them by hand. We had some surprise arrivals and then the chicks struggled to cope with the surface of the incubators even with our modifications.  We soon became adept at splinting legs to stop them splaying. We wondered at the rather pre-historic looking creatures that arrived wet and bony out of the eggs transforming into fluffy appealing bundles in 24 hours. 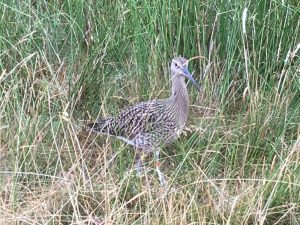 The bundles were demanding. Their original home of large boxes in our office understandably perturbed our patient landlord. Meetings held next door to our office in an atmosphere where the pervasive smell of a chicken (or curlew) farm dominated were trying for the best of landlords, and in Simon Cooter from Natural England we have the best of landlords. The warm weather meant that there was little anxiety about releasing them into their purpose built outdoor enclosure. Cold and wet would not be a problem. It was eviction for the chicks.

The European wide shortage of their main item of live food has been an ongoing problem. We were most grateful to Wiggly Wigglers for supplying us for free with a good ration of food to keep us going. Suddenly fires and electricity failure at factories meant that food everywhere was in short supply and we were searching out (and begging for) supplies on an almost daily basis.

We lost some chicks, but the others thrived. We learned which foods they preferred, when they ate larger quantities of food and they indicated to us when they were no longer willing to be shut away in a smaller, at that stage safer, enclosure at night. My favourite time was letting them out of the smaller enclosure first thing in the morning. The chicks flapped and snapped. Wings were spread to trial flights and insects were consumed among the rushes. They loved the shallow water pools that we gave them alongside more traditional drink dispensers and squabbled over occupancy when we had cleaned and re-filled them with fresh water. 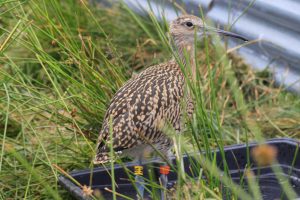 Awkward adolescence soon turned to graceful maturity and most of the downy feathers transformed into adult plumage. The chicks mimicked adult calls almost immediately but just more quietly. Their calls increased in volume and one chick shrieked in the final days before release, presumably trying to connect to the countryside outside the enclosure in a bid for greater freedom.

In the few days between the decision to release the chicks and release, Curlew Country farming partners, supporters, and volunteers were invited to two small gatherings to glimpse them before they were set free. We had been painstaking in our attempts not to socialise them with humans but realised that waders do not seem to incline towards being tamed. This was all good until the end of the rearing stage when there was much greater danger of the birds damaging themselves through flying when we entered the enclosure for routine care. Guests were taken to see the birds from a distance in small groups.

The side of the pen was removed, and the young curlews waded out, then some took to the air as those released last year at the migratory roost for curlew had. In the evening 6 of the 16 released were feeding in the rush pasture next to their pen. There was no sign of the others. This is a ‘soft’ release, so we are still putting food and water out for the loiterers and diminishing the quantities over time. A few days on 3 curlews are still regularly seen within a few fields radius of their release point. The second group of chicks will be released within the next two weeks from a different location. 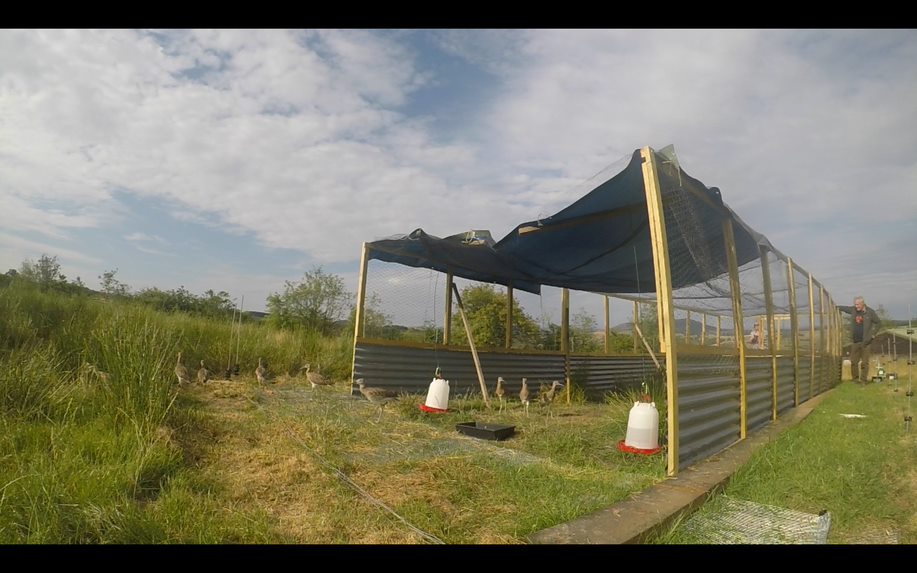 This year our focus has been on trialling headstarting. Our experience and advice from others including our friend and partner, the Wildfowl and Wetlands Trust at Slimbridge, leads us to think that there are all sorts of things we would like to do differently in another year. This would come at a higher cost. The loss of one egg or chick seems huge at the time, but of course this would happen in natural nests. None of the eggs that we returned to 3 natural nests survived. Our experience from nest monitoring in the first two years of the project demonstrated that no chicks survived from natural nests.

We have not been able to monitor second nests as intensively as we would have liked. Reports are coming in of chicks sighted and they mainly coincide with the areas in which the voluntary fox control contractors have been operating. Several reports are of adults in distress drawing attention to chicks being predated by avian predators. The headstarting should produce more curlews more quickly, whilst we try and get the conditions right on the ground for a more sustainable future for curlew.