On Monday 29th May, 2017, some of the Curlew Country team were joined by Tim Main. Tim along with others had been in touch about curlew sightings outside the Curlew Country boundaries in Shropshire. Tim came out in the hope that learning more about Curlew could lead him to help learn more about curlew behaviour and how, with some support from us it may be possible to help the nests local to him. His good observation skills helped with the tasks in hand on the day. He has kindly done a blog for us on his day out.

Due to the long hours and weather–dependent jobs, dates were at short notice and arrangements vague and brief. Despite this I met up with lead ornithologist, Tony Cross, for a fascinating day. 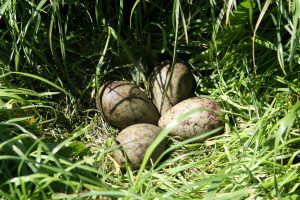 ‘Do not worry about the boots, we will be in the car’ was the strongest indication as to how I was going to spend the day. The key task for the day was tagging some chicks which had been seen to start hatching four days earlier. I learnt curlew take about three days to hatch from the first star cracks on the eggs. This operation only wants to be done when the grass is dry to prevent the chicks getting wet. Despite a dry day, the grass does not dry all day and the chicks could not be tagged.

The first nest we observed was the hatching nest. We stay well away, assuming one adult is on the nest. We observed the other (male) on nearby sentry duty. I learnt curlew share the incubating and if anything, the males dominate chick rearing duties.

The next nest, fenced for protection and the adult bird is clamped on tight so we do not disturb it. The sad conversation in the car between the two sites is about failed nests and trying to find a second nest if the pair try again. Often the second clutch is two or three eggs against the normal of three or four eggs.

The next nest we visit is a newly found and fenced nest and as the adult leaves it, it gives us a chance to weight the eggs and measure them, length and width. One is noticeably smaller, which is not uncommon. As the driving continues, we observe pairs that have failed still at their nest area in the hope of seeing nesting behaviour. We also visit areas where birds were nesting last year, this time without success.

Reports of curlew sightings took us to an open grass valley. Having located a feeding bird, a recording of the curlew call 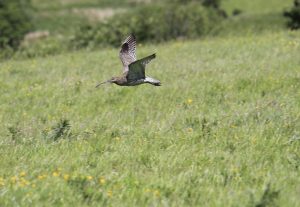 brought both birds into the air; if there was a nest it was on ground where the project was not welcomed. At the end of the day, the same call agitated a pair of birds, which were then carefully watched passing under a crow’s nest and walking to the nest in a large hay meadow. The landowner’s permission was sought by Mandi who had joined us by then and the nest with four eggs located. This would be fenced and measured the next day.

The excitement of locating this nest was dampened by the report from others that one of the other nests had been predated that day, one found, one lost. Now 21 nests have been found and still counting. I remember the day not for the hours in the car or the beautiful countryside we were in, but for the curlew’ behavioural patterns I learnt and for the patience needed to locate and monitor these nests.