In April 2017, Amanda Perkins Curlew Country Project Manager wrote a blog for the Game and Wildlife Conservation Trust to help them launch an appeal for requests of curlew sightings across the UK

The project is one of 14 that make up the Stiperstones and Corndon Landscape Partnership Scheme (LPS). Habitat within the scheme area includes moorland and grassland and the majority of farmers working with the project area have beef or sheep enterprises Working with farmers and landowners is an essential part of the project, and listening to their views and concerns has helped to build strong working relations that are vitally important to a sustainable future for curlew.

Curlew Country is a project that stemmed from the observations of a community wildlife group in Shropshire. This group has been diligently observing wader populations, using methodology from the British Trust for Ornithology (BTO), and noticed a startling situation occurring. Their estimates of the losses of curlew in Shropshire were 75% since 1990 and within the Curlew Country area over 30% in 11 years. With the UK holding over 25% of the Eurasian Curlew population the plight of these birds in Shropshire and across the UK is a very serious issue, one which requires action and fast.

The formation of a small Project Advisory Group to give good technical input, helped to inform the direction of the Curlew Country project. Having taken farmers concerns about predation into account a nest monitoring project followed. In the 2015 and 2016 breeding season over 30 nests were closely monitored to gain insight into the reasons that the curlew population in the Shropshire Hills and Welsh Marches is failing to breed successfully. Fieldwork carried out by contracted ornithologists closely observing curlew nests, included putting cameras on some and heat sensitive buttons (thermacrons) on others.

Sadly, the picture painted by these observations is not a good one. None of the monitored nests successfully produced fledged curlew. However, because the nests were being watched the project was able to get an idea of why they were failing; nearly all nests were predated at egg stage. The main culprit was found to be the fox, although eggs were also taken by badgers. Each year there have been one or two nests abandoned and about three lost due to agricultural activities. Farmers are at pains to avoid disturbing nesting curlew on their land, but nests are notoriously difficult to find as curlew make every effort to conceal their whereabouts.   A farmer cannot leave 2 or even 3 fields un-disturbed speculatively while a nest is found in one of them. 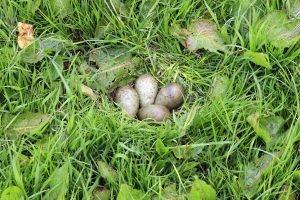 nests. In 2016 Curlew Country trialled temporary electric fencing around three nests (the first such trial on UK mainland). The nests protected by the fencing were the only ones to survive egg incubation to hatch chicks.   Whilst this intervention has been proven by NABU to get curlew eggs to hatching stage, the chick survival rates for curlew everywhere including those in Shropshire and the Welsh Marches it is a race against time. Interventions to boost chick numbers are essential to gain knowledge of what curlew chicks need to survive.

Because Curlew Country has its focus solely on waders, it has a flexibility that allows it to act quickly on the information and data gathered. Due to this speedy turnaround there are intervention methods that can be implemented, which this year includes the first trials of fox control in two areas. There is research to suggest that predation control helps greater breeding success of ground nesting birds. Whilst farmers already carry out some degree of fox control, it is on an unstructured basis and not necessarily tailored to the ground nesting bird season. The Game and Wildlife Conservation Trust (GWTC) and British Association for Shooting and Conservation (BASC) have helped with advice and training, to ensure the contract designed is as humane and effective as possible and will achieve more effective nest protection.

Alongside all the nest monitoring that has been taking place numerous arts projects have also been running in the local area to engage people and raise awareness. These have included sculpture and writing workshops, the formation of the ‘Curlew Choir’ and various events coinciding with Mary Colwell Hector’s walk from Ireland to the Wash. From these many locals have set up small fundraising initiatives to help the continuation of the project in the future. In 2017 ‘Curlew Conversations’ a reminiscences project, aiming to collect memories people have of waders in the local landscape has started and ‘A Case for Curlew’ aimed at families and children will start soon.

A farm business manager is also working with farmers to discover what the impact is on various different farm enterprises of supporting nesting curlew on farmland. This data will be fed back to inform policy makers in the hope of achieving realistic agri-environmental support in the future.

As the Curlew is now listed as internationally threatened, it is becoming more important to focus on helping the remaining curlew population to survive. The RSPB are funding monitoring and trialling intervention methods in moorland and upland areas, and waders are thriving on grouse moors. In the south, there are a number of small volunteer-led projects and NGO initiatives trying to reverse the curlew decline, but with inadequate structure and funding to adopt a comprehensive approach that will make a difference for all southern curlew.

Whilst it is clear that fencing and predator control measures may be effective in boosting the population in the short term, it is important that population monitoring continues. Nest protection and suitable habitat provision must also be tackled, along with the support for farmers who provide this, in order to increase the breeding success of curlew.