Skip to content
On Thursday night Jane and I popped down to Ynyslas on the high tides for a session dazzling waders. There wasn’t a lot there other than several 100’s Oystercatchers (which we don’t generally catch by dazzling), a good few Redshank and a handful of Dunlin and Knot. Right at the end of the night I noticed that one of the few Dunlin running around was wearing a metal ring – that doesn’t look like a BTO ring I thought! Thankfully, shortly afterwards, the bird gave itself up and sure enough the ring was one from the Finnish ringing scheme. I think that in over 35 years of ringing this is the first Finnish-ringed bird I have ever seen. 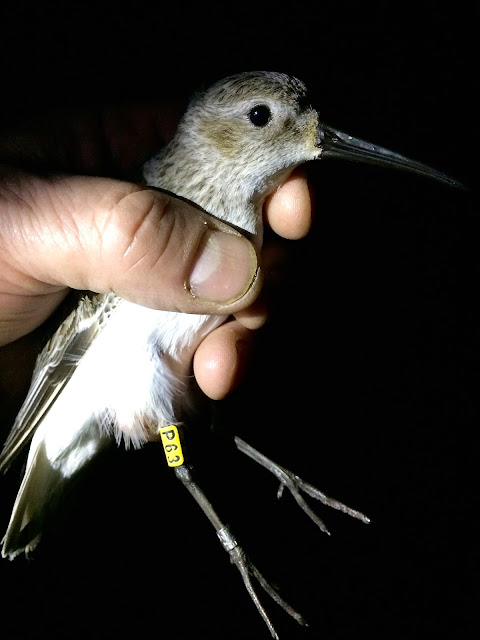 Finnish-ringed Dunlin with one of our colour-rings added
The total catch was 19 Redshank (including one control), 3 Knot, 2 Dunlin (including the Finnish one) and 1 Grey Plover. Will post details of the Dunlin when I get them.