Here is the next blog, from Rhian Pinches about life on the family farm during lambing.  It all sounds rather idyllic in this weather and rewarding for farmers like her family after the hard work that goes into the rest of the year, but all seasons are not the same and the challenges not always predictable. 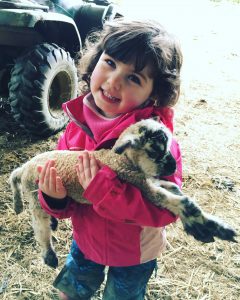 Rhi has heard rumour of neighbours having problems with corvid attacks on lambs.  I remember a few years ago, Rhi’s grandmother telling me about the significant losses that they had suffered from crow attacks that lambing season.  I have also heard of more than a few farmers finding carnage in the lambing fields from corvid attacks this year.  One farmer, at my request, sent a short video that he had recorded of a lamb attacked by a crow.  Eyes missing and wounded to the rear, he had managed to treat it and keep it alive, but others were lost and I could barely watch the short film, it made such uncomfortable viewing.

In this lockdown period, Curlew Country is continuing with its Countryside Stewardship Facilitation Funded work through the Farming Partners Group that Rhian chairs.  We will be planning for a varied programme of work after lockdown, but also putting some initial training into short introductory videos for farmers to help keep the flow of training information going.  We are responding to the immediate problems by including a session on the practicalities of reducing predation by corvids, including information on the new General Licensing laws that have made matters less straightforward and swift to deal with.

I hope you enjoy reading about lambs and calves nurtured and surviving whilst the sun shines. 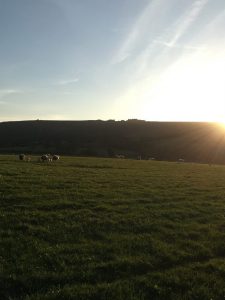 This week was beautiful! The weather conditions couldn’t have been better for lambing ewes, especially when they’re giving birth outdoors. It was warm and dry and the land just looks so luscious compared to recent months… it finally feels like spring! Baby lambs entering the world thick and fast, up here in the hills. Bright eyed, with warm sunshine on their backs and happy Mumma-sheep creating quality milk from the sweet, shooting grass.

However, don’t be fooled, there is always something to look out for and we can’t get too complacent to the fact that they are still sheep… therefore there will always be a handful looking to cause trouble! This particular week saw some little corners of the fields become a dumping ground for wet lambs! Now it is a prime example of ‘troubles’ when you lamb in a shed… you expect ewes to end up lambing practically on top of each other when they’re indoors, but when they’re spaced out in a field… it does just show their daftness! Popping out to the lambing fields and finding 7 wet lambs unorganised in a corner with three dopey ewes is like trying to figure out a riddle and was something that seemed to happen most days this week. Even if we spray numbers onto the lambs and ewes so that we know which babies are from which mother, they are still sheep… they can’t read the numbers! Therefore, we generally end up having to bring them into the shed and arrange them into their little families, pen them up and hope that they accept each other. What happens if they don’t ‘take’?: We use a little halter on the ewes to steady them and prevent them bunting the lambs away. The halter method is effective and it also means that the ewe can eat, drink, sleep and stand as normal, whilst she is safe and unable to be strangled!

This week also saw all of the ewes lamb that had previously prolapsed, which I mentioned in part 1 of this little series of tales! Most of the stories were successful…most… I won’t go into too much gory details on that as I am about to cook tea!! Focusing on the successful stories though, all of the ewes (bar one) have managed to deliver their lambs safely and have returned to the pastures with their lambs at foot and their rear ends back to normal and on the correct side of their bodies. 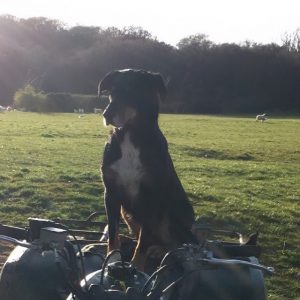 The ewes lambed fairly fast this week, so I moved them around twice; leaving the outfits on the original fields, (this means that I draft the ewes that haven’t lambed away from the ewes that have lambed resulting in a field of ewes and lambs behind. To do this I carefully use my dog to help sort them and lead them to the gateways.) I push the expectant mothers onto fresh fields. This makes it less likely that the ewes and lambs will muddle themselves up and makes it easier for us to focus on the ewes that are due to lamb, especially at night when using headlights and torches. This plan also enables the ewes with lambs at foot to have more space to graze and means that I only have to go around them twice a day to keep an eye on things. Coincidentally, it also means that the Curlew aren’t quite as disturbed as they have been since we walked the ewes home. The four pairs that we have here seem to be settling in the fields that we begin the lambing on, so once the in-lambers are moved on, hopefully we won’t be spooking the birds with the vehicles like we unintentionally have been in recent weeks.

Whilst on the subject of birds; how is everybody else managing with crows? The crow population seems to have quadrupled with us and it seems they have targeted two fields in-particular! Although at this point, they had not killed or even harmed any live lambs, we have known in the past, when lambing in the warm sunshine, that lambs will lay flat-out and crows will swoop down and peck their rears, so this is something we do worry about happening. We had lambs killed, that were perfectly fit at three days old, by crows a few years ago, just from sunbathing and becoming a still target! They’re so vicious! We watch them fight off the Red Kites in a bid to lug off the afterbirth from the sheep. 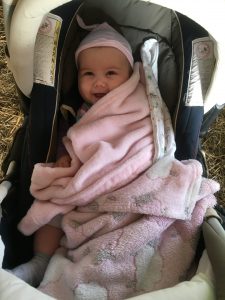 In this week, we began walking the cows home ready for calving. The two bunches of cows that we wintered outside on our ground a few miles from home had begun to calf and many were ‘bagging up’ which means that her milk supply is almost ready therefore giving birth is very near, so we walked them up quietly as one group, giving them a breather on a field halfway for a day or so and then walked them on up. They look lovely, happy, clean animals as they have spent the past few months on dry banks, even though it has poured down with rain most days in that time! As we moved them home I was feeling excited to see some new baby calves, I love the crossover from lambing to calving.

I can’t sign out without making a quick comment about how well my little girls have adapted to our part time, day to day running’s! The weather has obviously played a massive part in this and I don’t really know how I would have coped if we were faced with another episode of ‘beast from the east’ on top of isolation and a toddler and baby whilst lambing! The fact that we are unable to ask anybody to help us at the moment was a little worry in the run up to lambing time as I was kind of taking it for granted that I would have plenty of people to pop up and watch the girls for me originally whilst I was due to be busy. I have found that if I put them to bed late, they will get up late and taking a packed lunch out in the day has saved me an hour of pratting about the house in the middle of the day! A ride on tractor and a bucket of ewe rolls and a watering can has also been a lifesaver. I guess it goes without saying that the ‘pet’ lamb pen has also had its benefits when trying to keep a three year old entertained! Anyway… about that tea-time… I best go and make it! 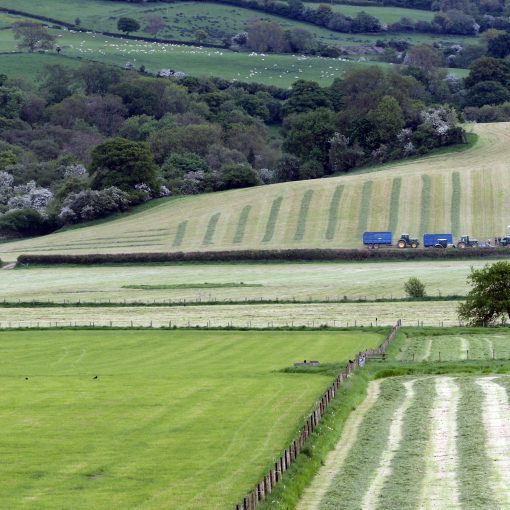 Blog by Amanda Perkins, Project Manager I have just been chatting to Tim, one of our small team who takes much responsibility […] 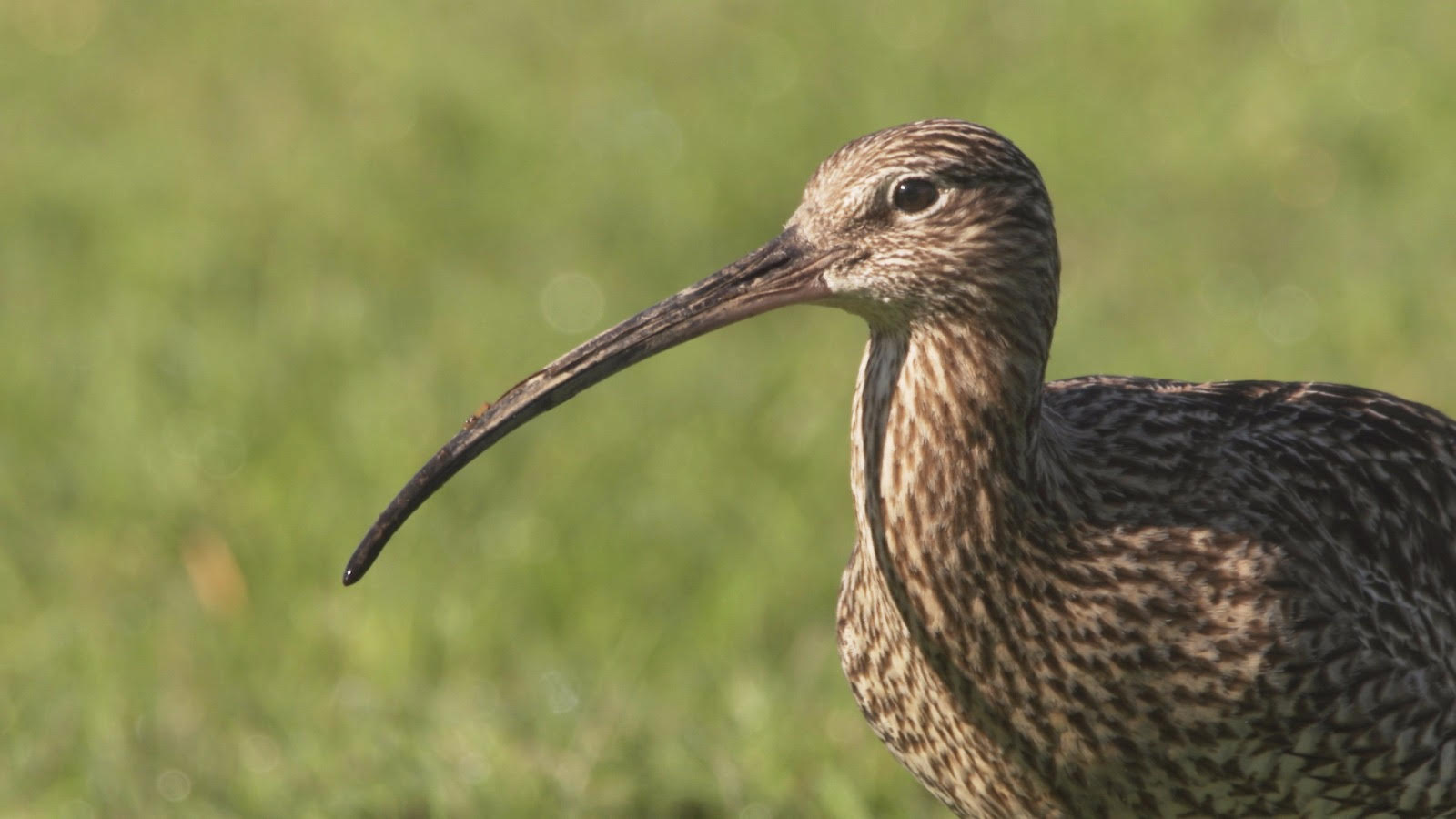 The Stiperstones and Corndon Hill Country Landscape Partnership Scheme (LPS) ended at Easter.  Curlew Country was one of 14 active projects that […] 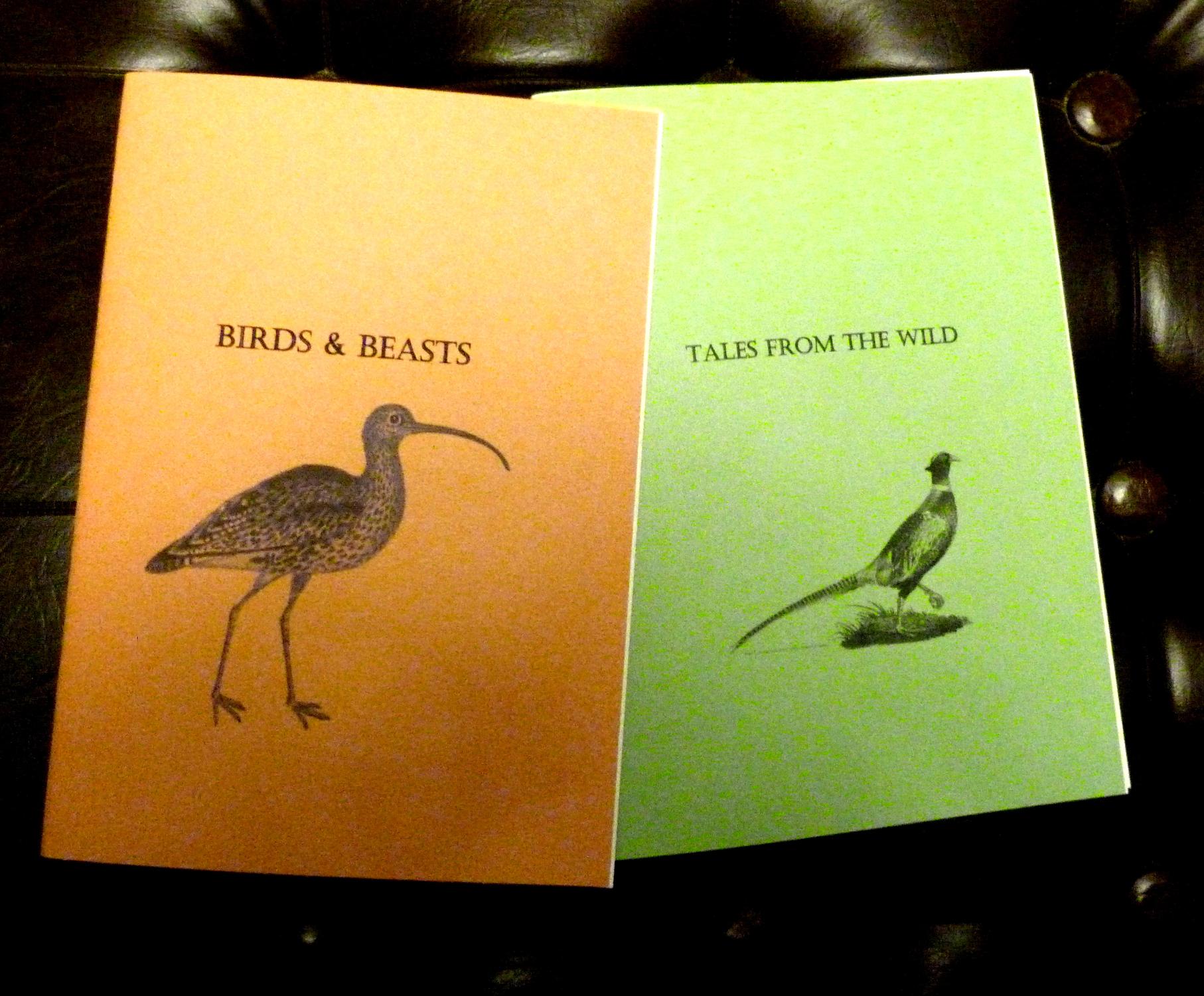 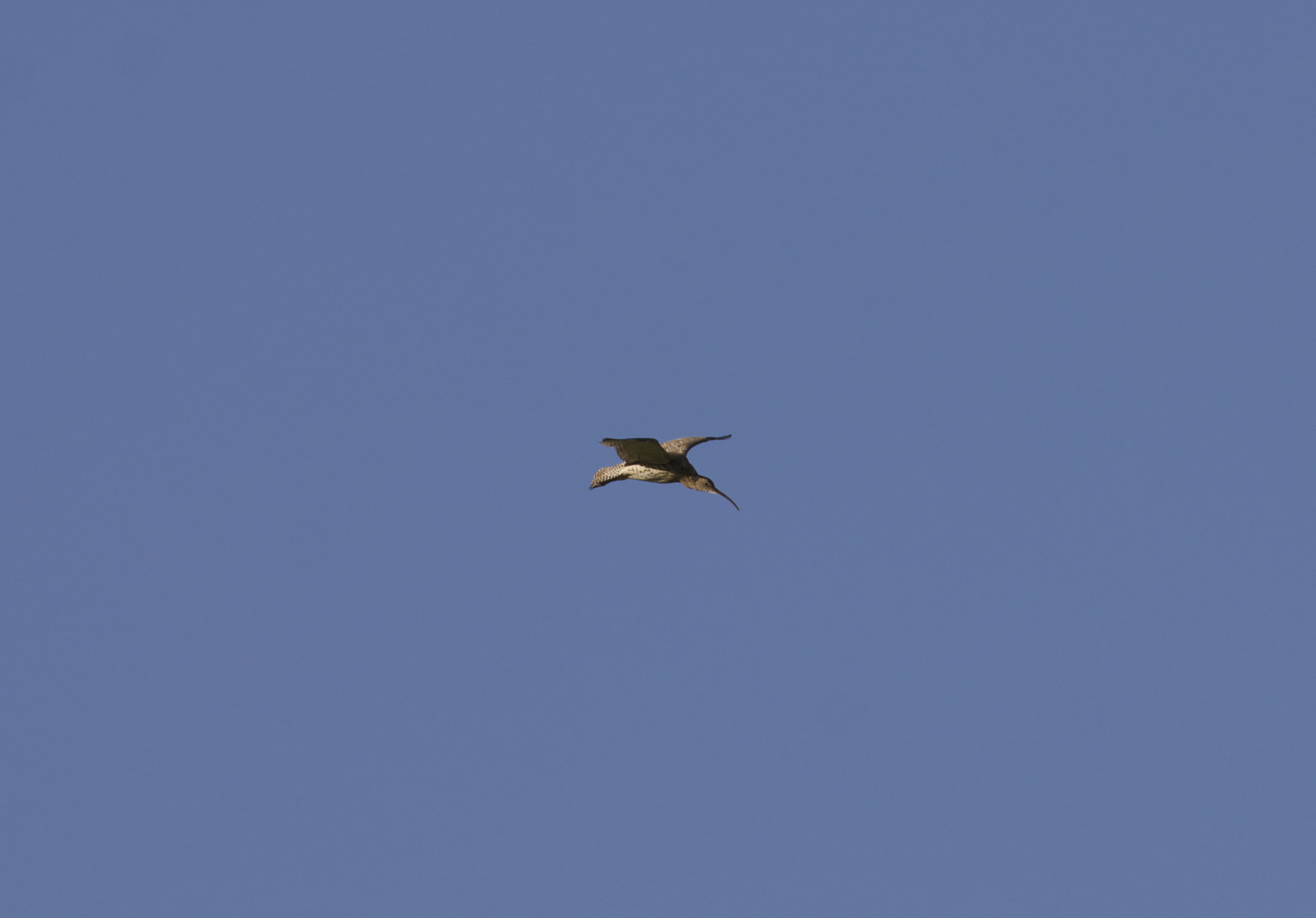 Carol is one of Curlew Country’s dedicated volunteers, who spends time in the season looking for signs of nesting curlew, as well as […]

The latest instalment of the Spring Farming Diaries From
@Rhipinches is here! Head over to the blog to read it now: https://t.co/SZMAa9RliB

The Latin name for the Eurasian curlew, Numenius arquata, is derived from the Greek neos and mene, meaning new moon and the Latin arcuatus meaning bow-shaped, both referring to the crescent shaped bill. #CurlewCam

Check out the latest blog from @CurlewCountry on all their success with Curlew chicks.

In the mood for something wild? Try this livestream from a curlew nest. Ma Curlew is sitting on an egg that is due to hatch on 3 June. Takes three days for the chick to peck its way out. https://t.co/dEznoqG8xb

When you haven’t seen or heard a nesting curlew all spring and see this on your first escape to the hills in weeks.