I worked on an estate on the island of Evia in Greece one summer many years ago.  It was an eccentric place.  Once I was in the garden of the main house, recuperating from a virus, when the mistress of the house flung open the shutters of her bedroom window above me and in a film star Scandinavian accent said ‘Mandah what will I do now all my chicks have gone from the nest?’  Thankfully, I did not have time to respond before the same lady disappeared. 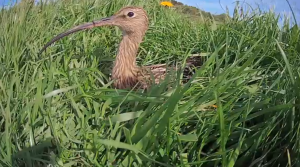 The Curlew Cam chicks have also gone and many of you have reported the sense of loss at their disappearance having watched them intensely through the incubation period.  For the Curlew Country team, the feeling is more one of apprehension about their fate.  This nest was found early in the season, before the incubation facilities were fully up and running, which is why we left the eggs in situ to face their natural destiny.  We know however, from previous years of nest and chick monitoring, that it is unlikely that the chicks will survive long.

There is better news on the headstarting front.  It is exciting to work with new partners The Wildfowl and Wetlands Trust, who have provided fantastic support to the project this year with equipment and staff time.  In addition, Chester Zoo is also supporting the headstarting with some staff input.  Both organisations have avicultural expertise and the Wildfowl and Wetlands Trust has had success with headstarting Black tailed Godwits in the east of the country.

Curlew Country has been the first organisation to trial headstarting of curlew in the UK.  All its work 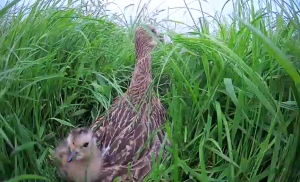 has been done on a shoestring before this year.  The project used general poultry incubators and brooders and reared in pheasant pens.  The first year all 6 chicks survived to be released at fledging stage and in the second year about half of the eggs taken resulted in chicks released at fledging stage.  This is a good result, but curlew are rarer than most poultry reared in this way and both Curlew Country and WWT are keen to see if the egg to fledge rate can be improved with the help of specialist equipment and expertise.  The chicks are starting to hatch in the incubators too, but there is greater excitement at their arrival as they should stand a much better chance of survival.

So, what about the fate of those chicks when they return to breed in our landscape? (As we hope that they will like the bird from our first heastarted clutch found back in ‘the patch’ this year). After all that exhausting work by the two dedicated Curlew Cam parents (who to the human eye looked tired and hungry and the end of the 30-day incubation period), the chicks are likely to be predated soon.  Had we not found this nest the eggs or chicks would have almost certainly been accidentally destroyed by usual agricultural activities.  As we are frantically out and about trying to find nests and save them, the farmers are frantically out and about trying to meet the demand for cheap food. 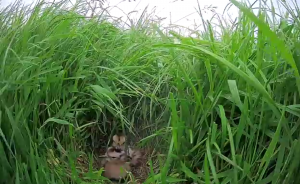 There is however, a fantastic conservation opportunity for which curlews would be the catalyst.  Farmers have a real affection for waders and are keen to prevent their loss from the farmed landscape.  Talking about them opens wider conversations on environmental matters and how they (farmers and land managers) want to work in partnership with empathetic organisations to achieve such goals.  They cannot, however, do so without adequate support and a number of ground-nesting birds, including curlew, will be lost without predation control to help save them now. All this could be expensive for one or two species but would more likely be of great value when the additional species, habitats, soil quality, water quality, carbon sequestration etc. are delivered when managing for waders.  We just need the policy makers to press the button now before time runs out.  The farmers who champion waders are the seniors in the business.  Curlew may be lost on their farms in their lifetimes.  A pivotal environmental opportunity will also be lost.